Our favourite places in Portugal (links):

Some Places To Enjoy Life... In Portugal

Portugal is a relatively recent discovery for us, and it didn't take us long to fall in love with the country and with its very friendly people. The cost of living is low, and the Portuguese really care about their environment, with almost 100% of their energy needs coming from renewables.

The Portuguese have a special relationship with the English, stemming from the old alliance between our two countries (the oldest such alliance in the world that is still in force). 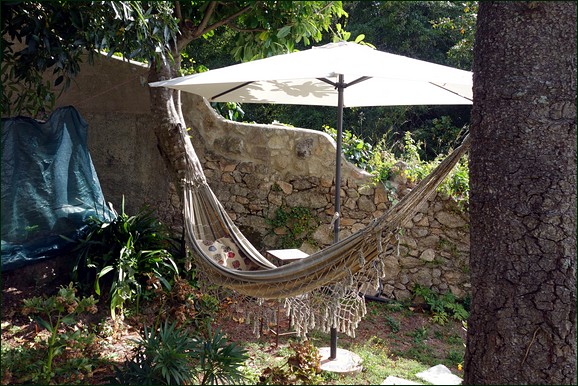 ...is one of our favourite cities. It's a huge place, with far more to see and do than is shown here.

If you click any image below you will be taken to more information about the place shown, which in some cases will come from my Categorian blog.

If you're interested, photos of our 2017 trip to Lisbon (which includes a cruise on the Tagus river) will be found here.

The Avenida da Liberdade (Lisbon's equivalent of the Champs Elysée in Paris, except for café and restaurant prices!)

Locals at one of the pavement snack bars, where a generous glass of wine cost less than €5 and an espresso €1.

In the background is an entirely peaceful protest about fees for adult education which took over an hour to pass!

Lisbon's Eden Theatre on the Avenida, a wonderful Art Deco theatre/cinema from the 30's, now converted into a hotel. I love the way in which the Portuguese often incorporate trees into their major buildings - another example further down this page. 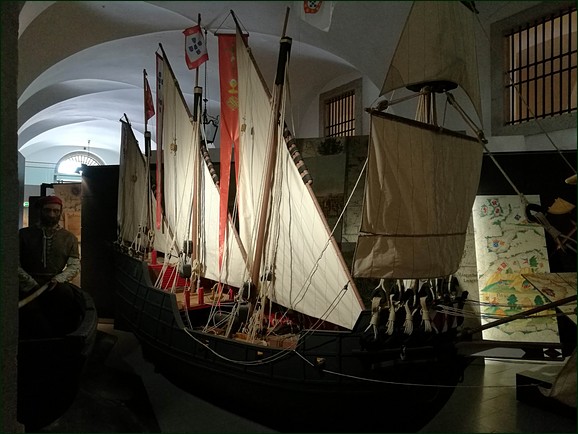 We learnt a lot about Lisbon's fascinating history in the Lisboa Story Centre, a cultural museum well worth visiting. It includes a very realistic recreation on film of the Great Lisbon earthquake of 1755

Outside the Centre on the Praça do Comércio (Commerce Square). The very large Italian restaurant here (Nosolo Italia) specialises in pizza, and is an inexpensive and very pleasant place to eat (I shudder to think what the equivalent place in Venice, for example, would set you back!). 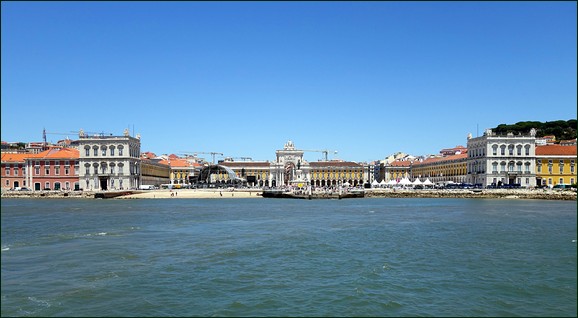 The Praça do Comércio (Commerce Square) was the setting-out point for explorations and commerce that affected so much of the world that we know today, as we learnt at the Lisboa Story Centre (see above), and from the Discoveries Monument (see below). 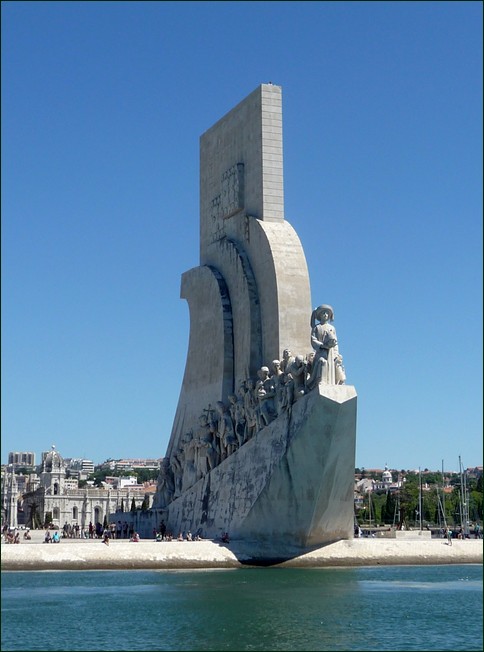 The Discoveries Monument, built on the north bank of the Tagus River in 1960 to commemorate the 500th anniversary of the death of Prince Henry the Navigator. 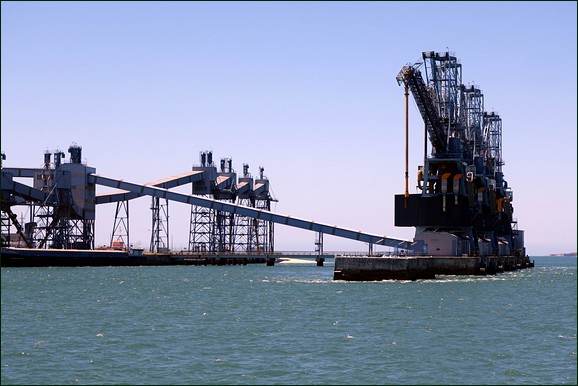 Near the mouth of the Tagus, very much a working river, where the river cruise boats turn around 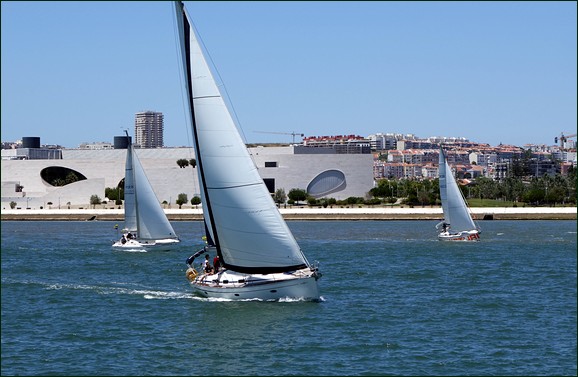 Sailboats passing the Champalimaud Centre for the Unknown, said to be the world's most advanced centre for research into cancer, brain damage and blindness, both medically and from an architectural point of view. From the river it looks a little like a cruise ship, but it is designed to look quite different from almost any angle in which it is approached. 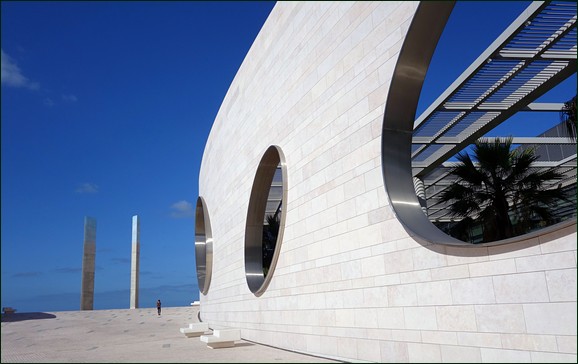 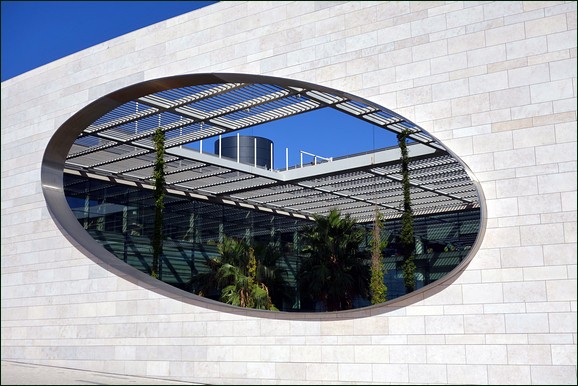 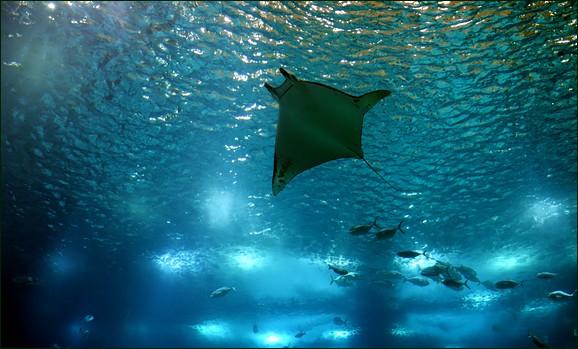 The Lisbon Oceanarium (location in the centre of this map) is said to be one of the best in the world. It is located on the banks of the Tagus (which the locals pronounce somewhat like a sneeze), which is enormously wide at this point, being crossed nearby by the 12km long Vasco da Gama Bridge. Click the image for my blog post about it.

Sintra (map link) is a very picturesque hill town, which can be reached by a 40-minute commuter train ride from Lisbon (costing less than 3€). It's a UNESCO World Heritage site with an interesting history, and has been among other things a place for aristocracy and royalty to escape to in hot weather.

We spent 6 days there in June 2017, staying at a wonderful Airbnb place. A small selection from my Categorian blog post about our visit appears below - click any image if you would like to see the whole thing. 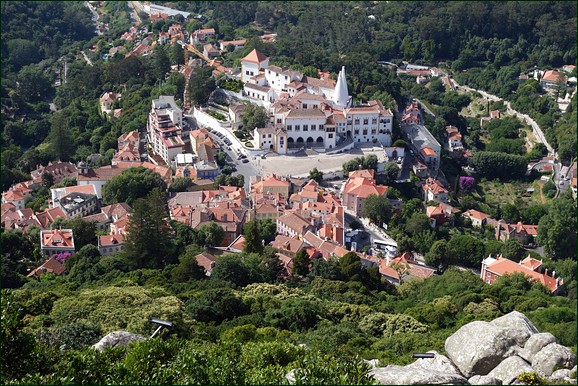 I took this picture of Sintra's centre on a walk down from the Castle of the Moors - see later. The building with the conical white roofs is the National Palace of Sintra, which we greatly enjoyed visiting last year. Our Airbnb place (see next photos) is just outside the left edge of the shot. 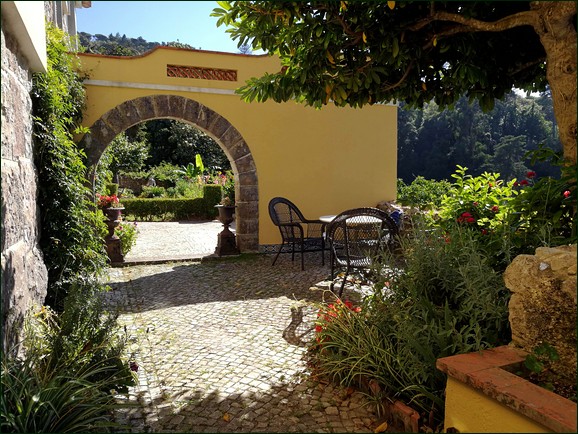 The terrace of our wonderful Airbnb place... 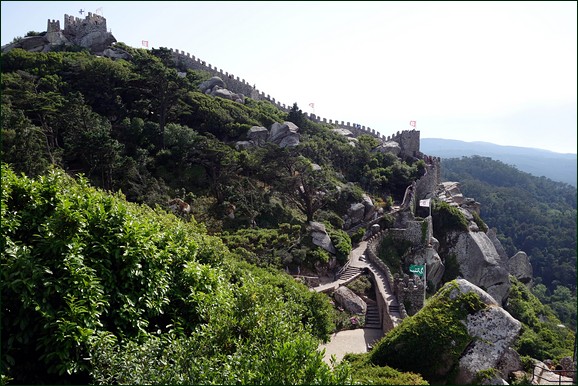 The Castle of the Moors is perched high above the town below... 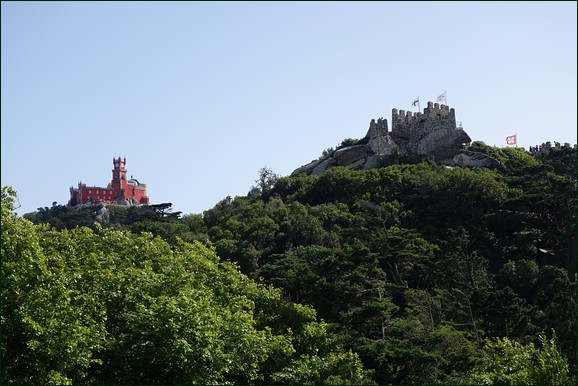 ...but there are places to visit even higher. From here we could see the palace in the vast Quinta da Regaleira, which looks down on the Castle of the Moors (click any image above if you would like to see more from my full blog post).

Porto and the Douro River

In June 2016 we took a special 7-day cruise on the Douro River in Portugal, a wonderful experience. This cruise started and ended at Porto and included navigating 5 locks, among them the highest single-lift lock in Europe.

We saw many examples of Portugal's use of solar power and hydro-electric power, and learnt why its world-leading investment in renewable energy is so good for its economy, as well as for the environment.

A (very) small selection from my Categorian blog post about our trip appears below - click any image if you would like to see the whole thing.

The first evening of our cruise was a harbour tour in Porto, beautiful in the evening light.

The building to the right of the cathedral, catching the sun, is the Bishop's Palace.

The Maria Pia bridge with the curved arch, commonly known as Ponte Dona Maria, is a railway bridge built in 1877 by Gustave Eiffel - who later was responsible for the Eiffel Tower in Paris and the Statue of Liberty in New York, among many others

Much later - leaving the hydro-electric Bagaúste Dam (one of five on this river, and with an 86 feet rise only the third highest), located here on the map.

It is actually the Carrapatelo Dam, down-stream from here and located here on the map, that has the highest single-rise lock in Europe (115 feet).

Looking back at the Bagaúste Dam from our cruise boat, the AmaVida (or “Love Life”) across the solar panels that cover its sundeck roof, lowered here for navigating the dam.

...and interesting rock formations in the narrow gorges (the Douro was a shallow river until dammed in the 1960's and 1970's, which was done both for hydro-electric power and to make the transfer of Port wine down river in the traditional boats much easier).

The Mateus Estate - remember Mateus Rosé? It was generated purely for export and to generate much-needed income, the bottle's shape taken from WWI canteens.

It turns out that this estate, and its owner, still plays a major part in the cultural and economic recovery of the surrounding district. More information in the full blog post!

The Estate is located here on the map, not far from the Douro River.

We learnt a lot about Port wines on this trip!

Our cruise included a trip to Castelo Rodrigo (link to many images), a very picturesque fortified hill town, current population now down to 65, overlooking the border with Spain (see here on the map).